If you love ice cream, then you probably own an ice cream maker or plan to invest in one in the near future. The Cuisinart ICE-21PBLK and Cuisinart ICE-30R are among the most popular Ice Cream Machines in the market. Featuring freezable bowls, these machines can practically prepare several delicious and healthy desserts, such as ice creams, sorbet and yogurt in 20 minutes or less. The ICE-21PBLK is smaller at 1.5 quarts and is considered an entry level device. The Cuisinart ICE-30R is slightly larger at 2 quarts, but still utilizes the same features and functions as the ICE-21PBLK to produce high quality frozen desserts.

Contrary to what many people believe, the ICE-21PBLK and the ICE-30R pretty much produce the same quality of ice cream. The company basically used the same concept to create two devices. It should be noted therefore that the differences between the two are based on their designs and not on the quality of frozen desserts each one makes.

ICE-21PBLK
Domestic ice makers are grouped into three categories, based on how they cool ice cream: there are those that use ice and salt, then there are those that have built-in freezers and lastly, there are those that are pre-frozen in the freezer. The ICE-21PBLK falls in the latter category. It comes with a small bowl that measures about 5 inches high and 7 inches wide with a 1.5 quart capacity, which makes it the smaller of the two. The bowl is lined with a special liquid gel that freezes to a solid when placed in a freezer. This is what is used to transfer the coldness to the mixture.

ICE-30R
The ICE-30R also features a removable bowl. It is slightly larger at 2 quarts and measures 6.4 inches high and 7.8 inches wide. It includes double insulated walls that ensure the solid gel retains the cool temperatures for a long time. Both ice makers feature the same liquid gel and it takes 6 to 24 hours for the gel to become solid in both cases.

Conclusion: The two devices utilize the same bowl design with a liquid gel lining in between insulated walls. Although the ICE-30R has a slightly larger bowl, it still has to be kept for 6 to 24 hours for the gel to solidify just like the ICE-21PBLK bowl.

ICE-21PBLK
The base is fully constructed from plastic with a simple On/Off button for operation. It has a powerful motor that churns thick mixes with ease. On the underside, it has four rubber feet that keep the machine very stable during operation. The rubber feet also suspend the base above the surface to allow proper air movements through the ventilation, which prevents the motor from overheating. It also includes a 24-inch power cable, which gives it sufficient ground to work comfortably.

ICE-30R
This ice maker has an attractive main body constructed from brushed stainless steel. It has a manual dial switch for the On/Off operation and a 35-inch power cable that is easily pushed into a compartment at the base after use to prevent the cable from damaging. Due to the fact that the ICE-30R has more capacity than the ICE-21PBLK, it features a larger and more powerful motor to deal with thicker mixes. Also, it has a 12 tooth gear on the base top which fits in a 12 tooth slot at the bottom of the bowl. The motor spins the gear and the gear spins the bowl to process the mixture.

Conclusion: Aside from the shape and construction material, the two power bases are basically the same. The ICE-30R motor is more powerful to deal with the extra work, although the ICE-21PBLK motor is also powerful and easily gets the job done. Unlike other ice makers however, the motors in these two devices spin the bowl from below instead of the paddle from the top, which makes them more efficient.

ICE-21PBLK
The dasher has two main functions: to add air to whatever is being mixed and to scrape the frozen mixture from the walls of the bowl. This ice maker features a plastic dasher that is anchored still by the plastic lid on top, as the removable bowl is rotated. This allows the mixture to freeze and smoothen faster. The main advantage of a revolving bowl over a revolving dasher is that the bowl is heavier and sturdier and can work through very thick mixtures, without much trouble.

Devices that feature revolving dashers struggle with thick curds, due to two reasons: first, the plastic dashers are not strong enough and two, they are spun from the top. The motors have to work extra to get the gears moving to spin the paddle from above and sometimes the gears just falter from the strength of the thick mixture. The ICE-21PBLK gets rid of this anomaly by including a revolving bowl.

ICE-30R
The ICE-30R also includes a plastic dasher that is slightly wider to fit the larger bowl. The blades of dasher are close to the walls of the bowl to ensure that there is less insulating ice forming around it. This ice maker rotates the bowl at a much slower pace than the ICE-21PBLK (21 revolutions against 32). This means that the ICE-30R produces ice cream that is dense and creamy at 27% overrun (air incorporated). The ICE-21PBLK on the other hand produces lighter and fluffier ice cream at 40% overrun.

Conclusion: There is a 2mm gap between the blades and bowl walls in both cases, which results to a thin layer of frozen mixture that does not scrape away. This insulation layer does not affect the overall quality of ice cream in the end, but it slows down the freezing process.

ICE-21PBLK
The ICE-21PBLK may have the smaller capacity and may appear smaller, but its dimensions are actually larger. Its base measures 9 inches wide and 9.25 inches deep with an 11.25 inch high lid. It also weighs around 10 pounds, which is significantly lighter due to the fact that it is mostly made of plastic and its motor is slightly smaller.

ICE-30R
The ICE-30R has a smaller footprint than ICE-21PBLK, which means it takes less counter space. It measures 8.5 inches wide and 8.5 inches deep, while the lid is 11.5 inches high. It is also heavier weighing around 12 pounds, since it is constructed from stainless steel. It is also taller and occupies more cubic space.

Both devices make fantastic ice cream, sorbets, frozen yogurts and other frozen treats. There isn’t much difference in the quality of the final product, except from the fact that the ICE-21PLBK makes a slightly smoother ice cream than the ICE-30R. The ICE-30R may appear as a delicate device, but it is actually strong made from durable plastic.

It will comfortably handle anything you throw at it. The Cuisinart ICE-30R is the sophisticated of the two with a nice polished stainless steel body. They are both equal in terms of performance. Therefore, your choice should be based on capacity. If you want small batches, then the Cuisinart ICE-21PBLK is the right choice for you. If you prefer larger batches however, then the ICE-30R should be the go to device. 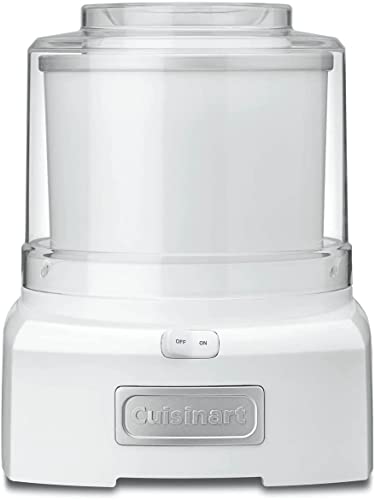