If you are on the lookout for a juicer, you won’t go far wrong by choosing the Aobosi Slow Masticating Juicer. Unlike centrifugal juicers, especially the heat-sensitive ones that take away a lot of the nutrients, this cold press juicer will meet all your health requirements. 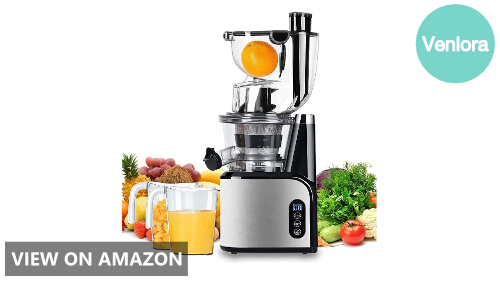 The juicer has two chutes which make it more versatile than a juicer with just one. One chute is large at 83mm and is capable of taking a whole apple, orange or similar fruit. This has the benefit of reducing preparation time, though you may want to peel oranges or grapefruits as the skins can give the juice a strange taste.

Also, the less chopping you do, the less oxidation takes place, giving you a fresher juice and one which lasts longer.

The juicer is also equipped with a smaller, 38mm chute which is capable of taking vegetables and smaller fruits such as strawberries and raspberries. Stringy vegetables such as celery can also be juiced, as can many other greens.

With just three buttons and an LED display indicator, this juicer is very simple to operate. It can be put to use as soon as it is taken out of its’ box. It is easy to assemble and to take apart for cleaning.

The Aobosi AMR8825 Juicer is amazingly quiet, unlike some centrifugal juicers. The motor runs at just 47 – 60 decibels so you won’t be waking up the neighbors when you switch it on. In addition, the unit has a stable body which doesn’t move around the kitchen work surface.

The juicer separates the juice and pulp perfectly leaving you with more juice and less pulp. The filter holes are evenly distributed which means that your juice will be smoother.

With the cost of fruit and vegetables rising, getting the most juice out of them has become an important factor. 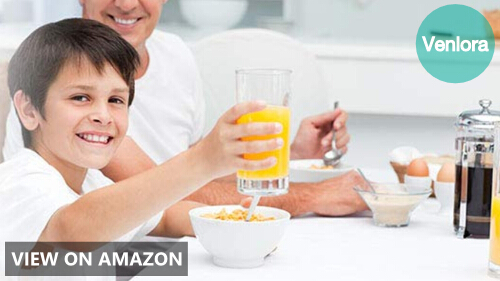 The juicer has a safety lock on it and won’t operate unless this is taken off. All the better if you have small children in the house. It will not work until the juicer cover is put on.

All parts are made of TRITON which is approved by the US Food and Drug Administration. It is, in fact, the most commonly used material in the US and Europe for baby and infant products. It easily resists both corrosion and heat. The juicer is also BPA free. BPA is an industrial chemical which has been used in certain plastics.

This Aobosi Juicer is very easy to clean and comes with a 2-heads brush. Alternatively, the different parts can be put in your dishwasher. It comes with a reverse function which helps to avoid stuck pulp, making it easier to clean as well. 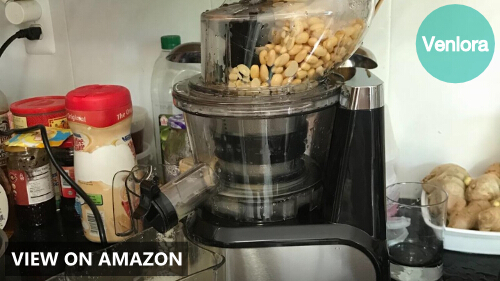 Heat destroys vitamins and minerals, but a slow juicer keeps the fruit and vegetables cold, meaning that the nutrients will be retained. The more vitamins and minerals we get, the better our immune system is, and this is particularly important for people with chronic illnesses.

The design of this juicer is drip-free, which stops the juice from spilling out. Because this juicer spins at such a slow speed, it is also possible to make sorbets, ice cream, butter, pate, sauces, and baby food with it.

As can be seen, the Abosi Slow Masticating Juicer is a valuable addition to your kitchen. Because it is a cold press juicer, you will retain the nutrition from the fruits and vegetables that you juice. It is easy to operate and clean, and its’ two shute system means that you can juice even bigger fruit without preparing first. Go on, treat yourself. You won’t regret it.

Check how much you can save, buying the Aobosi AMR8825 Juicer on Amazon >>>

Shop the Best Juicers on Amazon >>>