This model comes with basic features without much frills and fanciness that other more expensive models offer. It doesn’t have eye-catching displays nor does it have some extras, like water filters. Even its milk frother makes use of the classic wand. It is a super automatic espresso machine which will offer you what you need. Nothing more. Nothing less.

Despite its lack of fancy features, the ESAM 3300 is still a well-built model, considering the affordable price that it comes with. Maintenance comes easy with the ESAM 3300, especially with te brewing unit that can be easily detached with the machine.

The grinder also offers a number of settings that gives you choices when it comes to grind size.
The ESAM 3300 is marketed as a machine that gives the barista the freedom to create. Everything, from espressos to lattes, can be adjusted according to your personal taste for as long as you know what to tweak with the machine. The machine gives many options and combinations to choose from indeed. Give all these, the question as to its worth comes to mind. Is it really as convenient to use as advertisements claim it to be? It really that versatile? Is it really worth the price?

Design
In terms of appearance, it becomes pretty obvious that the ESAM 300 is meant to be an entry-level machine. Its compact body measures 11×15.3×14.4” so space isn’t really a problem for this machine. It also weighs at only 23.2 pounds.
While silver in color, the exterior is built from plastic, This seems to be an attempt at achieving a polished stainless steel look which, unfortunately, the manufacturers have failed to do.
What it lacks in terms of appearance thoug, it makes up for in terms of features. The machine comes with a cup warmer, as well as auto-shutoff system that can be adjusted from a setting of 15 minutes to 3 hours.
The De Longhi Magnifica is simple, yet cleverly designed, which makes it easy to use. It appears uncluttered with just 2 main knobs and some buttons for operation. Its indicator lights serve guides during the brewing process.
The display shows you options as to the number of servings that you probably would need. The number 1 or 2 indicate either a single or double serving of the same size. The size depends on the water volume of your choice. An example of this would be choosing number “2” on the machine on an 8oz. cup. This simply means that you are getting two cups of coffee that is meant for two 8-oz cups.

Brewing System
One nice thing about the De Longhi ESAM 3300 is its water tank which can hold up to 60 ounces of water. If you are the type who is into americanos, or any water-diluted beverage, this would be perfect since it lessens your need for refills. The tank can be accessed from the front so refilling it isn’t inconvenient at all, even if the machine is placed in some narrow space. Indicator lights are there to let you know a refill is in order,
The only downside to the water tank is that it lacks a filter. This means that you would have to buy filtered water for the machine, or you would have to install a water filter on a separate outlet so it serves as your water source.
The ESAM 3300 comes with a dual thermoblock system – one for the steamer and one for the brewing side of the machine. Despite these separate heating systems though, one can’t help but wonder why steaming and brewing cannot be done at the same time.
The grinders of the ESAM 3300 are conical , stainless steel burs which offer different grind settings. The manage to grind coffee beans quite efficiently and consistently, although the noise is quite noticeable for this grinder. It also tends to weaken during finer grind settings.
As for the bean hopper, the ESAM 3300, features a large bean hopper that can accommodate up to 8.8 ounces of beans. This again eliminates the need to constantly refill the hopper.
The wand’s design also somehow shows that this machine is indeed an entry-level machine. Unlike other steam ones that are purely made of stainless steel, the steel wand of the ESAM 3300 comes with a removable plastic sheath which covers the stainless steel pipe. The good thing about it though is that when the sheath is removed, the wand can be used a traditional steamer giving this wand more versatility. Setting appearances aside though, the wand actually delivers in terms of functionality and is, in fact, quite easy to clean.

Cleaning the De Longhi Magnifica ESAM 3300
Like all other espresso machines, whether super automatic or not, the ESAM 3300 should be cleaned daily in order to maintain it at peak performance.

Cleaning the Brewing Unit
The brewing unit is completely removable and quite easy to clean. It only needs to be washed under running water and air-dried before it is again good to go. Do take note that the brewing unit is not dishwasher safe.

Cleaning the Steam Wand
The steam wand needs to be cleaned after each use since milk residue may harder and get stuck inside the stainless steel pipe. In order to clean the wand, you simply have to wipe it with a damp piece of cloth while briefly allowing the wand to work, releasing steam. Take extra caution though when doing so since the steam coming out of the wand can be quite hot and may cause injury.

Decalcification
The disadvantage of this model is its lack of a water filter. This means that you will have to decalcify the machine more often, especially when you live in an area which uses hard water. Be sure to check for water hardness so you have an idea as to how often you’ll need to decalcify your machine.
When using the machine, it is highly recommended that filtered water be used in order to avoid mineral buildup. Mineral buildup tends to affect the taste of your coffee and it isn’t good for the machine long term. It is important to remember to never skip on the decalcification process since this is a part of your machine’s maintenance.

Final Verdict
For a mid-priced, affordable super automatic espresso machine, this machine actually delivers. It can be considered to be of high quality, offering you many choices and features to choose from.
It manages to deliver consistent brews which are catered to your personal taste as what is expected of aa super automatic espresso machine.
Its beauty lies in its simplicity and ease of use. It removes all the unnecessary frills in high-end machines which, in the end, actually makes things more convenient for everyday use.
In terms of maintenance, every aspect is simplified as well so you don’t end up getting frustrated.

There are other brands and models which are considered to be at the same level as the ESAM 3300. These are the other models worth to consider;

De Longhi ECAM 22110SB
This line of superautomatic espresso machines comes with a more expensive price tag. It, however, has more features as well. A notable feature is the aroma button which is meant to improve the aroma of your brew. It also is quite compact so space won’t be an issue with this machine. Another outstanding feature of this model is its energy saving feature as it is said to save up to 77%in terms of energy consumption.

Gaggia Brera Superautomatic
The outstanding feature of this machine is its four filtration system which greatly lessens scale buildup which happens with unfiltered water. Having four filtration systems also means that you rid your water of impurities which may affect the taste of your coffee. This machine is also quite easy to maintain and a pre-infusion feature helps brew coffee that delivers great aroma and rich flavor.

De Longhi ESAM 3500 N Magnifica
This is the fully programmable model of the De Longhi brand. It has different pre-programmed menu settings which takes the guesswork out of more common coffee preparations. Brewing time is faster with this model and it also is good to note that as compared to the other De Longhi lines, it’s conical grinders are more silent and less irritating. 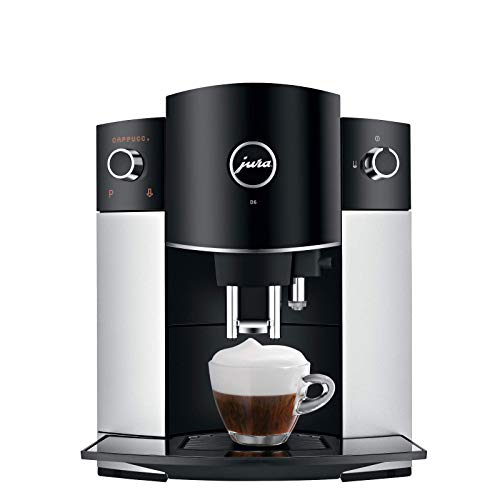