Freshly-squeezed juice is all the rage right now, with colorful, flavorful bottles popping up everywhere, from the farmer’s market to your Instagram feed. The trouble is, buying individual bottles of fresh juice can be incredibly expensive, but squeezing all those fruits and vegetables one by one is such a hassle. Fortunately, Omega Juicers has the perfect solutions to all your juicing woes in the form of the NC800 and the NC900HDC!

Both of these powerful machines are low-speed, horizontal masticating juicers with extra attachments that allow you to make a variety of other healthy foods as an added bonus. No matter which one you choose, you’re sure to end up satisfied with your freshly-squeezed juice!

Omega Juicer NC800
This powerful kitchen appliance features exclusive dual-stage masticating extraction. Other juicers use faster motor speeds. Faster might seem better, but in this case, the friction heats up the juice and causes it to oxidize, lowering the flavor quality of the finished product. The NC800 operates at 80 RPM, which is a lower speed that results in fresher-tasting juice. It also features five adjustable pressure settings and a 2HP motor to accommodate a wide variety of fruits and vegetables, allowing you to make juice from virtually anything! Omega Juicer NC900HDC
Like its sister model, the NC900HDC also boasts dual-stage masticating technology, ensuring that your juice tastes as fresh and flavorful as possible. You’ll absolutely be able to taste the difference between this juice and the kind that you buy at your local grocery store. It also features five pressure settings that are controllable using the included nozzles. The 2HP motor generates more torque than other models, allowing you to squeeze the juice out of the roughest, toughest ingredients.

Conclusion: Each of these juicers features the same dual-stage masticating extraction technology and a generous variety of pressure settings. They also each come with a powerful 2HP motor that can break down tough fibers without making a lot of noise. When it comes to juicing power, the NC800 and NC900HDC are equally good options, with absolutely no difference in technological quality between them. Regardless of which model you choose, the juice you produce will be fresh, delicious, and plentiful!

Omega Juicer NC800
As we mentioned before, this juicer’s powerful extractor can make juice out of fruits, citrus, and all kinds of vegetables, including wheatgrass, spinach, carrots, and kale. In addition to making delicious fruit and vegetable juices, the NC800 can also make nut butter, nut milk, frozen sorbets, baby food, and pasta. You can even use the powerful motor to grind coffee, pulverize spices, and mince herbs. You’ll be amazed by the versatility of this juicer.

Omega Juicer NC900HDC
The NC900HDC’s juicing capabilities and versatilities are identical to those of the NC800. Like its sister model, this juicer’s Nutrition Center can easily make five other types of food in addition to fruit and vegetable juices, from peanut butter to soymilk. It’s also capable of acting as a coffee grinder, spice grinder, and herb mincer. Conclusion: A quality juicer can be a big investment, so you’ll be glad to know that both of these models are capable of making a lot more than just fruit juice. Their versatilities are identical, making them equally good choices. The NC800 and the NC900HDC can both make nut butter, nut milk, sorbet, and baby food. They can also extrude pasta, grind coffee and spices, and mince herbs. You’ll absolutely get your money’s worth out of either the NC800 or the NC900HDC.

Omega Juicer NC800
The NC800 is sleek and light, with a pleasant silver color that will look great in your kitchen. It also comes with a variety of nozzles, cones, and bowls that allow you to make delicious juices out of virtually any fruit or vegetable. This model also features automatic pulp ejection, so you can juice continuously and clean up easily afterward. Its feed chute is also relatively large, so you don’t have to cut up all your fruits and vegetables before putting them in the juicer.

Omega Juicer NC900HDC
The NC900HDC is streamlined, sturdy, and comes in a futuristic chrome color that looks stylish and modern. It comes with the same variety of attachments as the NC800. It also boasts automatic pulp ejection, meaning you don’t have to stop juicing to clear pulp out of the machine. The wide feed chute minimizes the amount of prep you have to do beforehand, allowing you to make delicious juice in absolutely no time!

Conclusion: The major difference between the Omega Juicer NC800 and NC900HDC lies in their designs. The NC800 is about 5 pounds lighter and comes in silver, whereas the NC900HDC is sturdier, heavier, and comes in chrome. Both models have the same attachments and design features that allow for the easiest, cleanest juice-making experience with minimal mess.

Check how much you can save, buying the Omega Juicer NC800 on Amazon >>>

Both the Omega NC800 and the Omega NC900HDC are absolutely excellent options for the juice enthusiast or health fanatic looking for a new juicer. Their dual-stage mastication technology prevents overheating and oxidation, giving you the tastiest, freshest juice each time. They both come with Nutrition Centers that allow you to make a whole bunch of other foods in addition to juice, including nut butter, sorbets, and homemade pasta.

They both feature automatic pulp ejection and a wide feed chute. The main difference between the two is in heft and color. The NC800 is lighter and silver, whereas the NC900HDC is heavier and chrome. No matter which model you choose, you’re sure to be pleased with the delicious juice, tasty nut butter, and refreshing sorbet that you’re able to make! Check how much you can save, buying the Omega Juicer NC900HDC on Amazon >>> 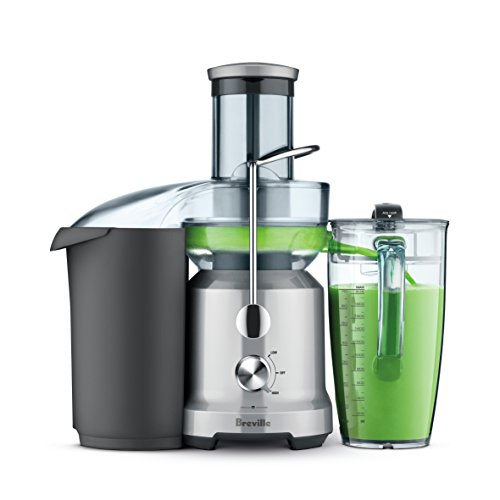