If you are a beer enthusiast, then you probably know what a kegerator is. For those who don’t, a kegerator is basically a cooler for keg beer. One of the best kegerators is the Edgestar KC2000, a full-sized kegerator with enough space to accommodate almost all types of keg barrels.

This cooler offers the full package when it comes to keeping your beer chilled and also maintains the original fresh brew taste to the last drop. It comes with precise temperature controls, is portable, can be converted to a refrigerator and most importantly, it is fairly priced. Here is what you need to know about the EdgeStar KC2000 Kegerator.

This kegerator comes in an innovative design that includes two finishes, standard matte black and matte black with a stainless steel door (abbreviated with “SS” at the end like KC2000SS). The external measurements of this cooler with the draft tower included are 48 ½” H x 20 1/10” W x 24 13/16” D and weighs approximately 81 lbs.

At the top is a chrome guardrail that holds the beer mugs neatly in place, while at the bottom it features four casters with locks that allows you to easily reel it to whichever location you see fit.

Aside from the main unit, this kegerator comes with all the needed components to keep the beer chilled and crisp. They include: stainless steel column draft tower, chrome-plated brass faucet, Sankey coupler, single gauge regulator, a 5 foot beer line, a 5 foot vinyl air line, black tap handle, spanner faucet wrench and most importantly an empty 5 lb.

Aluminum CO2 tank. Setup is very simple and with the included manual you can easily install it by yourself.

Where the Edgestar KC2000 Kegerator shines the most is its spacious interior. The fact that the CO2 tank is mounted externally at the back of the cooler, reserves all the interior space for the keg barrels.

It also comes with a temperature control system that allows you to set the required temperature range as recommended by the manufacturer to preserve the crisp and rich flavors of the beer. The temperature ranges between low 30s and mid 40s, which is the right range for all types of beer.

Another great feature of this kegerator is that it can be converted to a refrigerator. The interior is pretty much open and it is up to you to design it whichever way you want.

This machine also offers no inconveniences when it comes to cleaning. Cleaning the interior is straightforward as it is basically open. The drip tray collects all the spillages at the top, while at the same time protecting the machine. The drip tray is dishwasher safe, which takes away the need to wash it manually.

It comes with a smaller 2.5lb CO2 tank that is fitted inside the cooler. This takes a considerable amount of space and greatly limits the types of keg barrels that can be used with this machine. As a result, it can only fit one sixth barrel or Cornelius keg barrel. The EdgeStar Craft KC1000SS also lacks casters, which makes it hard to transport to other rooms.

The only areas that the EdgeStar Craft KC1000SS edges the KC2000 is its digital temperature control system that has a higher temperature range that stretches to upwards of 50 degrees. The KC2000 has an analog temperature system with a range that only reaches mid 40s.

The EdgeStar Craft KC1000SS also has internal blue LED lighting that gives it an alluring look. Aside from these two factors, the KC2000 is the better cooler as it is portable and supports more keg barrels. If you are looking to own a beer cooler for your own home use and the beer consumption in your household is not very high, then the EdgeStar Craft KC1000SS may work out fine for you.

The Kegco K309SS-2 has one of the best cooling system that utilizes a combo of a digital temperature control panel plus fan-aided cooling that ensures even cooling throughout the kegerator. The control panel also allows you to switch between Fahrenheit and Celsius and adjusting the temperature is as simple as pressing the up or down buttons.

It also has one of the largest temperature range that stretches from low 32 degrees to 75 degrees. As a result, this cooler is very versatile. Apart from being a kegerator, it can be converted to a refrigerator or a fermentation chamber on its highest temperature setting.

It also features a special deep chill function that quickly cools a warm keg. In addition, it has a very spacious interior that allows it to accommodate all types of keg barrels including rubber kegs, Moors kegs and Miller Lite kegs. It can even hold three 5-gallon Cornelius ball lock home brew kegs or two 5-gallon D system kegs.

This means therefore that you can serve two different beers at the same time, if you install a draft tower with two faucets. It also features casters with locks for stress-free mobility and even has a built in drip tray that is dishwasher safe. It comes with the full keg tapping kit that is easy to assemble and disassemble. The Kegco K309SS-2 is without a doubt the superior kegerator.

Seeing that that they are both manufactured by the same company, the Kegco HBK209B-2 resembles the Kegco K309SS-2 in so many aspects. It also features the same spacious interior that can accommodate up to three 5-gallon Cornelius ball lock homebrew keg barrels, has casters with locks for easy mobility and can be converted to a refrigerator.

The EdgeStar KC2000 is a reliable kegerator that can work in a home or commercial setting without a fuss. Unlike the large commercial coolers, it is reasonably priced and can save you tons of money, if you are looking to purchase a cooler for commercial purposes. 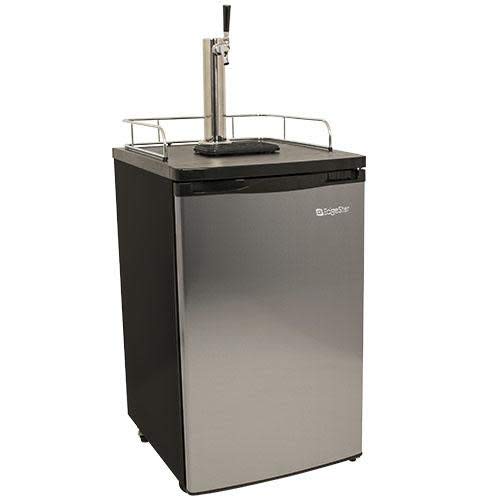